The Land Treatment Site is home to numerous species of wildlife. Deer, bobcat, fox, turtles, and many types of birds have all been sighted on the grounds.

The storage lagoons are a favorite place of migratory birds. Geese, ducks, crane, and swan have all stopped here on their respective journeys. Birdwatchers are welcome during normal operating hours to observe the waterfowl. View a map (PDF) of the area. 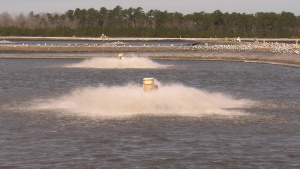 The Land Treatment Site is also a host site of the North Carolina Wild Turkey Restoration Program. In 2002, approximately 15 wild turkeys were released in the spray irrigation fields. Since that time, they have multiplied with great success. It is not uncommon to see hen turkeys followed by a clutch of chicks out in the fields.

The City of Jacksonville established two wetland areas at the Land Treatment Site, to compensate for unavoidable impacts during construction of the spray fields. Eighteen acres of Loblolly Pine plantation were restored to a high pocosin ecosystem, and 11.5 acres of bottomland hardwood was restored or enhanced.

Over 30 acres of wetlands have been restored, more than compensating for 20 acres destroyed during the building process. These areas were monitored for a five-year period, in order to ensure that the wetlands environment was being recreated. Ground water measurements were taken on a weekly basis, as well as annual vegetative surveys.

After the five-year period, it was concluded that the sites were a qualified success. The only measures still required by staff members are monitoring of ground water levels at one location, and continued re-establishment of the bottomland hardwood site by the replanting of bald cypress, swamp chestnut, and water tupelo.